Freediving is young and actively developing sport with its own characters, history, myths, and terminology. Below we have listed the basic terms and concepts that every freediver should know in order to communicate with friends and colleagues in the same language.

Apnea – the cessation of respiratory airflow or a voluntary breath-hold. Freediving also may be called apnea diving.

Breathing – the process of moving air into and out of the lungs to facilitate gas exchange with the internal environment, mostly by bringing in oxygen and flushing out carbon dioxide.
.
Static apnea (STA) – discipline in freediving when the diver attempts to hold his or her breath for as long as possible while their respiratory tracts are immersed in water. This is also the only discipline which measures the duration of the dive.

Dynamic apnea – swimming distance horizontally underwater, usually in a swimming pool, whilst wearing bi-fins (DYNB), monofin (DYN), or without fins (DNF). The goal is to swim as long as possible, time doesn’t count.

Free Immersion (FIM) – diving to depth and back by pulling down and back up a dive line, wearing the same amount of weight for the descent and ascent without fins.

Variable Weight (VWT) – diving to depth using weight, then the weight stays at the bottom and freediver ascends by finning or pulling on a dive line using the arms.

No-Limits (NLT) – diving to depth using weight, and then using a lift-bag or other buoyancy device to return to the surface.

Equalization – equalization of pressure between your body cavities and the surrounding environment during your diving to depth. There are three main air spaces to equalize: middle ear, sinuses, and mask. There are a number of techniques that can be used to equalize the pressure in your air spaces, including Frenzel and Valsalva maneuvers.

Frenzel Maneuver – pushing with your tongue or cheek muscles against your pinched nostrils to create air pressure.

Valsalva Method – exhaling against pinched nostrils and using the air in your lungs to create pressure.

Contraction – an involuntary spasm in your respiratory muscles caused by an elevated level of carbon dioxide in your body and the rising urge to breathe.

Soft palate – a mobile fold of soft tissue that separates your nose and mouth cavities and directs the flow of air in and out of your lungs.

Surface interval – the required minimum time between two dives to minimize the risk of decompression illness which freediver should spend at the surface.

Freefall – the state when the diver reaches sufficient negative buoyancy on a dive to sink without physical effort.

Hyperventilation — any type or pace of breath exceeding your body’s needs. Symptoms of hyperventilation include light-headedness and dizziness, tingling in the fingers or other parts of the body, euphoria, and an increased heart rate.

Blackout – a loss of consciousness due to insufficient levels of oxygen in the body.

Samba or Loss of Motor Control (LMC) – involuntary contractions generally develop in the neck, shoulders, arms, and occasionally in the leg muscles. A loss of motor control can happen following a freedive if your oxygen levels are too low. LMC can precede a blackout but in this case, the freediver is conscious.

Laryngospasm – a protective reflex activated by a blackout and is an involuntary closure of the voice box which prevents water from entering the lungs.

Nitrogen narcosis – a perception-altering state that can happen with freediver during dive on a big depth. It may cause loss of short-term memory, slowing of reactions, the ability to adequately assess the environment is impaired, mental and motor control is weakened.

Barotrauma – the physical damage of body tissues which results from a difference in pressure between internal body cavities and the external environment. For freediving most common barotraumas of ears, lungs, sinuses, and eyes.

Lung squeeze – injury to your lungs due to increased ambient pressure on the enclosed air spaces of your lungs during a freedive.

Reverse block – a situation that may happen during ascent. In this case air in the middle ear is blocked by a closed Eustachian tube, for example, if plugged by mucus. The trapped air expands on ascent causing pressure and pain in the ears.

Safety lanyard – part of freedivers equipment. One end of the lanyard is attached to a dive line and the other to the freediver so it prevents from getting lost in the open water.

Alkalosis – a shift in the acid-base balance of the body towards a decrease in acidity. In freediving, alkalosis can be achieved by using hyperventilation.

Hypocapnia – a low level of carbon dioxide in arterial blood. It occurs during hyperventilation and allows you to delay the urge to breathe.

Cyanosis – blue discoloration of the skin or mucous membranes due to high levels of hypoxia.

Hyperthermia – overheating of the body.

Bradycardia – slowing down of the heart rate and blood flow velocity.

Peripheral vasoconstriction – the constriction of blood vessels in the extremities to redistribute blood, optimize oxygen supply to vital organs and the brain.

Blood shift – the expansion and filling of blood vessels in the lungs with blood to compensate for the increase in external pressure when diving to depths below the residual lung volume.

Tidal Volume (TV) – The amount of air breathed in and out when relaxed and at rest.

Vital Capacity (VC) – The total amount of air we are able to exhale after full inhale.

Residual Volume (RV) – The amount of air left in our lungs after a full exhale. For an average human, RV is 20-25% from TLC.

Total Lung Capacity (TLC) – The total amount of air in our lungs after a maximum inhale (VC+RV). 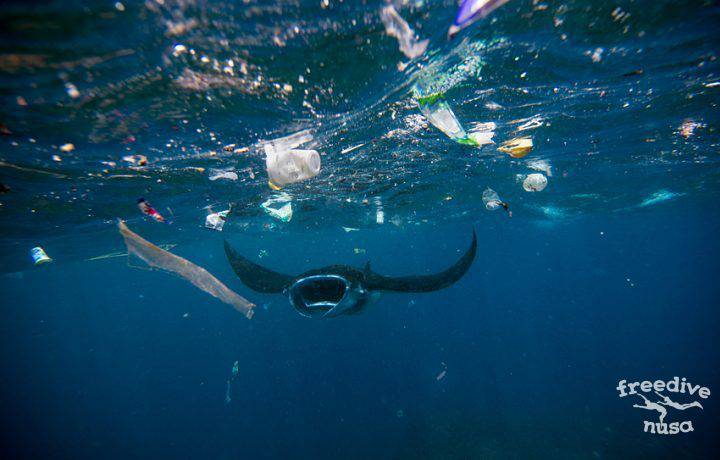 How each of us can make the ocean cleaner
Read more 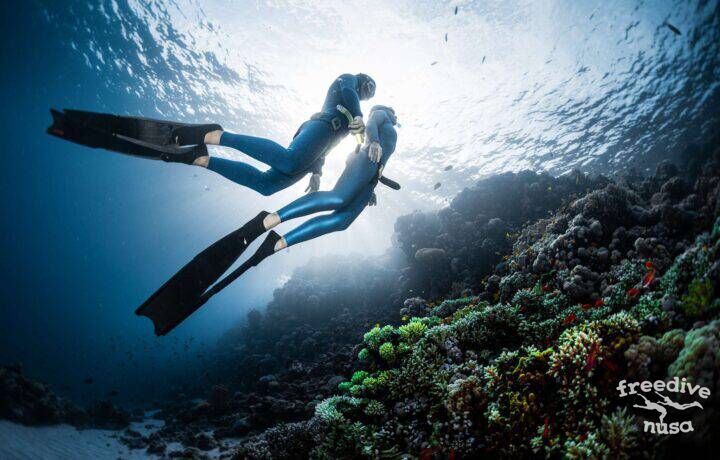 Why Freediving is Good for Your Health
Read more 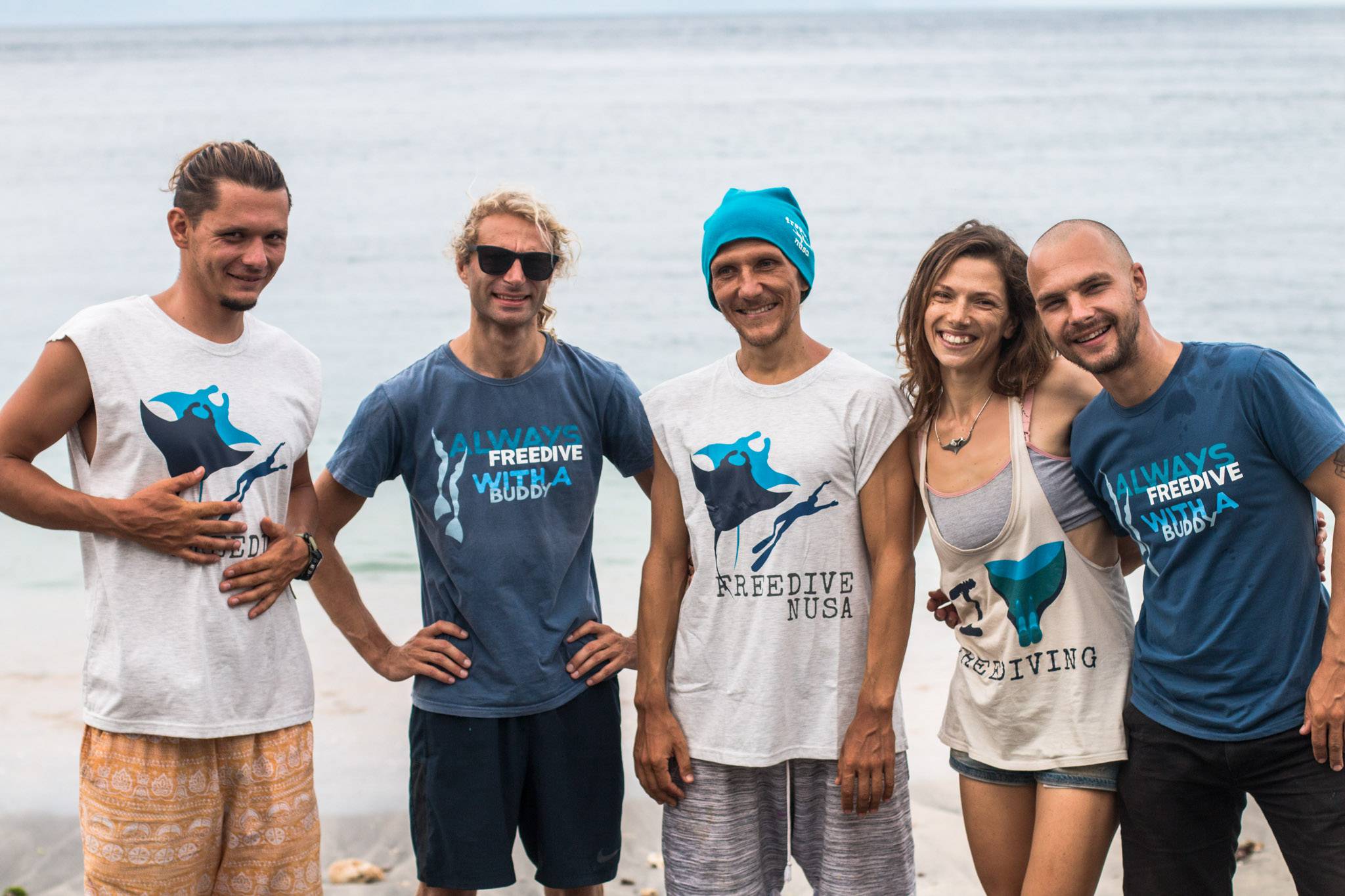 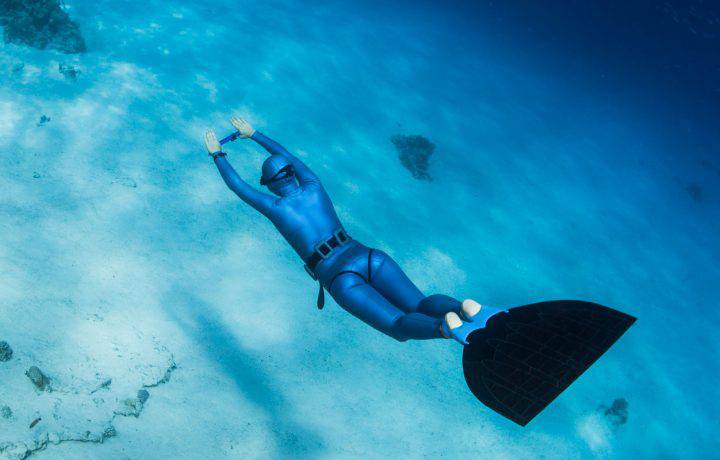